The year is 2020. Twitter mobs force brands to have political positions. You post something, it gets taken out of context, and a lynch mob is sent to get you. The president of the United States is posting the latest memes about politics and hiding in a bunker. The rest of the United States are posting the latest memes about politics and trying to destroy such bunker.

My roommate downloads Tinder. She gets 80 matches in the first night. Every man and his dog are there. They built the AI to find the best profile pic, but forgot the AI to find the best profile to pick. She filters through matches like they are job applicants. Meanwhile, the men shotgun the wall, mostly shooting themselves in the foot. Tinder is now the world's most played mobile game.

"Do it for the gram" crosses over from irony to self-fulfilling prophecy. I start doing new things for my new god, the Gram. Pride and Envy are celebrated here, and there are many followers. We all "love" each other here. Although ❤️ and 😘️ mean different things, HAHA. The people who are loved most are called "the influencers", although I've never met one. They must be busy influencing the others. My real name can only be changed every 14 days. Odd, but fair.

We meet a man on campus, he doesn't know his neighbours. He says he only chats with the checkout chicks. I know this feeling from Holland, except the Dutch checkout chicks didn't talk. Hahahah. This man comes from a Romanian village. I don't think they have checkouts there. He misses the local grandma who'd hold him accountable. Maybe he'll miss the checkout chicks when he's sent back?

There's no strong epilogue here, because this one was more just freeform absurdity. Some observations:

My birthday is this week. Social media is only 15 years young. I forget that only in 2005, it was blogs and comment systems. There will be better, less toxic, less ego-driven, more humanist platforms to come. And I cannot wait to build them. 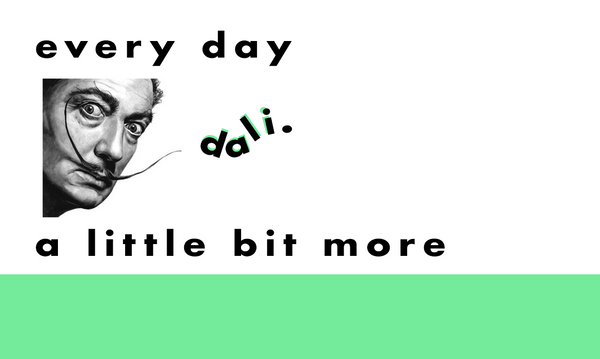 I watched an interview of Dali yesterday and came across this beautiful quote. In response to "what did the famous painter enjoy doing every day?", his answer was simple.

I always despised people that went to the gym. The idea of training inside a box, paying money to do so, instead of exercising outside just baffled me. Until I got a job.